The Executive Board members of Central Ohio’s Romance Authors of America have a decision to make tonight.  Their  long-standing treasurer and cherished friend Yvette “Evie” St. James has embezzled the Chapter’s entire treasury, and the police will not launch an investigation unless the Board members agree—via voting—to press charges.

The play’s action revolves around each member’s conscientious effort to cast the “right” vote. Evie herself joins the proceedings in the form of a spirit, accompanied by her male muse and chief nemesis, The Player. The Player serves as all of the women’s muses.

Through depictions of each woman’s romantic novels, set in historical, contemporary and futuristic times, along with flashbacks of the members’ various personal  encounters with Evie, the play explores the nature of romance, friendship and forgiveness, and that line--perhaps thin--which separates creativity and madness.

Inspired by a true story. 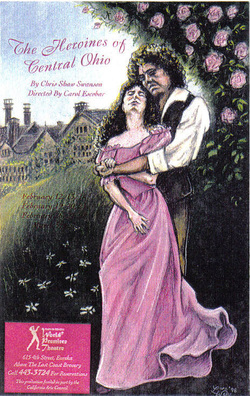 "Heroines (is) devious, whimsical...Swanson's dialogue is smart, sassy, flowery and blunt in its exploration of the women's whimsy...(It) satisfied the secret fantasies that lurk in the souls of all romantics."--The Arcata Eye, CA


"The dialogue is witty, intelligent, and at times, sexually captivating...Deception and laughter ensue in this ambivalent journey."--Out & About, PA

Can Sara find fulfillment while living in today’s Midwestern suburbs? She regards her subdivision as a hotbed of materialism. She views her neighbors, typified by Diana (busybody) and Robin (not busy enough), as vacuous company.  And she finds her
marriage to Tom, fraught with communication and fertility problems, challenging at best. But Sara also develops a warm rapport with African-American Audrey who works at the neighborhood drycleaners. And she discovers a soul mate in college professor Brian.

Ultimately Sara learns that those she dislikes are in some ways as vulnerable as she is, and that those she admires are not perhaps the role models she had imagined.  Sara also begins to perceive the hurtful, self-righteous aspects of her own personality, prompting her to make a significant decision that brings with it pain yet a strange measure of hope.

"The writing of Tophet Point is strong and well developed.  Swanson's usage of metaphors is excellence...it is a play written around dreams worth investigating..."--Times-Standard, CA

Excerpts published by Smith & Kraus in The Ultimate Audition Book, Vol. 4: 222 Comedy Monologues 2 Minutes and Under; and in ICWP’S Mother/Daughter Monologues Volume 1: Babes and Beginnings.

As a young, ambitious writer new at Loren Corporate Images, Bridget is determined to succeed, even if that  means embracing the eccentric guidance of Annie Mack, the agency’s increasingly paranoid creative director. Bridget must also contend with Terry, a goof-off who writes under aliases like “Mickey Angelo” when he’s not trying to goad Bridget into games of death charades. Another coworker is George, the only visual artist on staff and everyone’s pal.  Annie is hell bent on fixing George up with her niece. She doesn’t know he’s gay--and George is in no hurry to tell her.  Finally there’s Peter, the agency’s high energy, not particularly bright sales representative. Marital discord has forced Peter to move into his office and live out of gym bags in secrecy. Or so he thinks.

All of their jobs are threatened when UDP, the company’s top client, decides to “comparison shop” agencies. To retain their business, the creative team  must come up with a minority recruitment campaign that will win over UDP’s new African-American vice president of human resources. The challenge of securing the UDP account serves as the backdrop against which each employee’s “measured honesties” come to light.

Although this play is set in the 1980s, recruitment “hype” and social dynamics are not much different today.  Don’t believe it? Check out Monster.com. And keep an eye on the people around you. You just might catch them dancing around the truth. 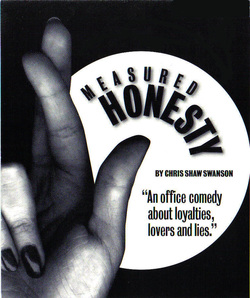